Out of Africa – A Personal Ancestral DNA Journey

DNA testing allows you to follow the path taken by your forefathers. After receiving my BigY700 DNA results for FTDNA, I joined the human genetic family tree following the route my direct paternal line took out of Africa.

DNA is full of SNPs (pronounced “snips”) which stand for Single Nucleotide Polymorphisms, i.e. mutations. Human genome projects are building the human family tree based on these SNPs (genetic anthropology), since they sit on a timeline & can be geographically placed. At the current rate, it is expected that in the next decade or so, some parts of the SNPs family tree will have reached a time when it becomes genealogically relevant and joins branches that have surnames (and meeting those of us also working back from modern times as genealogists and family historians).

I have known for a while that my paternal line was U-106, part of the original hunter-gatherers that settled in Europe and that I was in subgroup R-M269 which was a mutation that occurred 25,000 years BP. Not very genealogically relevant. I am now a member of R-BY35893, which is a subgroup of R-BY35882. This suggests a mutation that occurred sometime during or after the Medieval period (c1400 AD) in East Anglia of England, since BY35882 has been tracked as having occurred in England at that time.

Anyone with a SNP/clade designation can use SNP Tracker to generate tracker maps. This one shows my paternal direct line moving through the ages from West Africa, the Middle East and as far east as Western Mongolia before being turned back by the advancing ice age. The route then passed though the Caspian in the Palaeolithic, with a Mesolithic sojourn in the Caucasus, before the more rapid Neolithic expansion into Western Europe. My direct paternal genes came across the North Sea to East Anglia of England with the Anglo-Saxons. There remains a 400-year gap to close between the last confirmed SNP and the birth of my 3x great grandfather c1811 in Colchester, Essex. 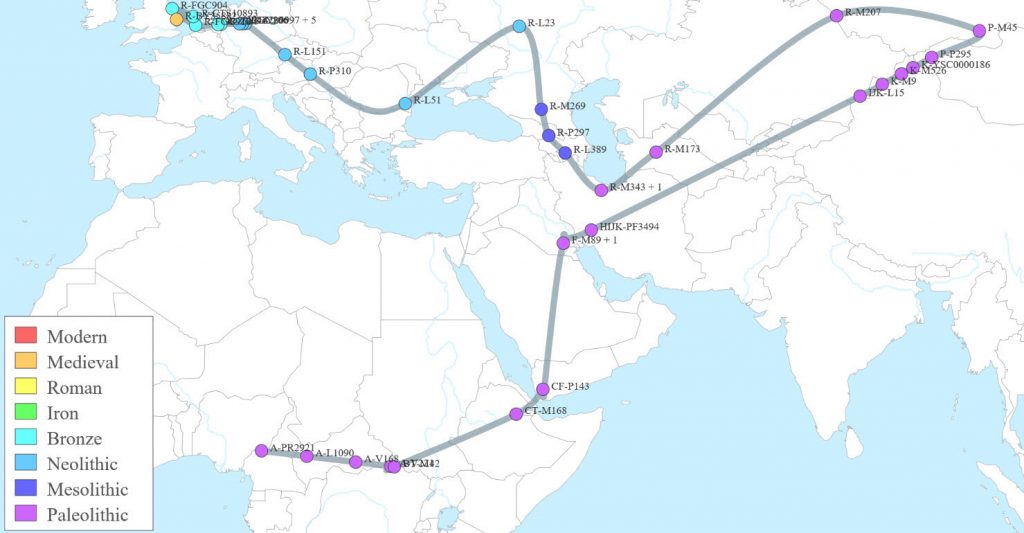 A basic mtDNA test allows you to do the same for your direct maternal line. My mtDNA haplotype is T1a1. While my most ancient male roots come from West Africa (the earliest being AP-R2921 dated at 240,000 year BP), the female line comes from the Rift Valleys of East Africa, the cradle of humanity. The earliest mutation, RSRS is dated at 160,000 years BP. Mutation “N” along the migration route in present-day Pakistan is dated to 50,000 years BP, so a very different jorney to my direct paternal line. 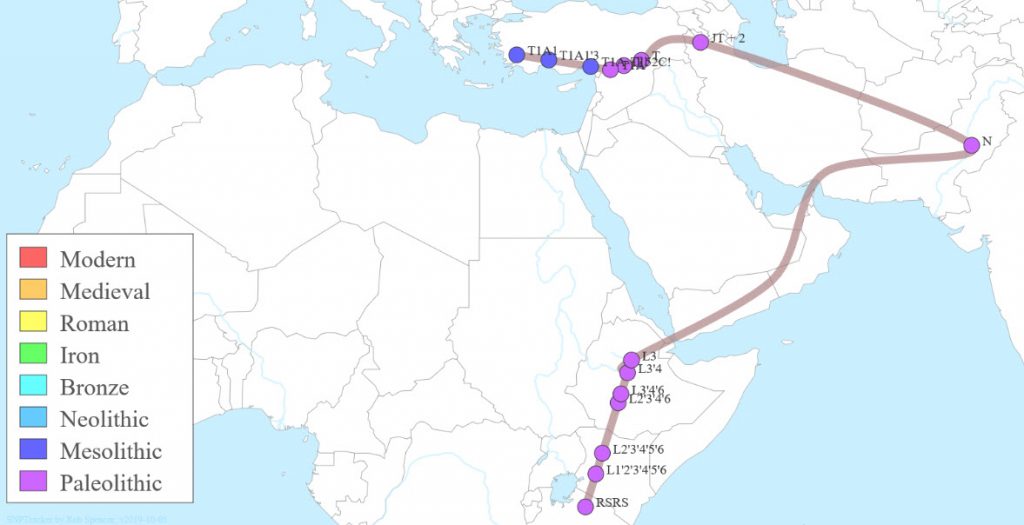 The T1a1 mutation in southern Turkey is dated at 9,600 year BP. There are also more detailed mtDNA tests available for those who wish to close the gap towards the modern period (equivalent to the BigY result). In the modern era my mtDNA has been passed down from my 4x great grandmother, Lydia KIRK, a hairdresser born in 1784 Birmingham. The earlier maternal line remains uncertain.

My wife’s mtDNA journey that finally ended up in Ireland is downstream of haplogroup H, which was the essential the same as my direct maternal ancestors up to SNP “N” in Pakistan and then a slightly later journey west. 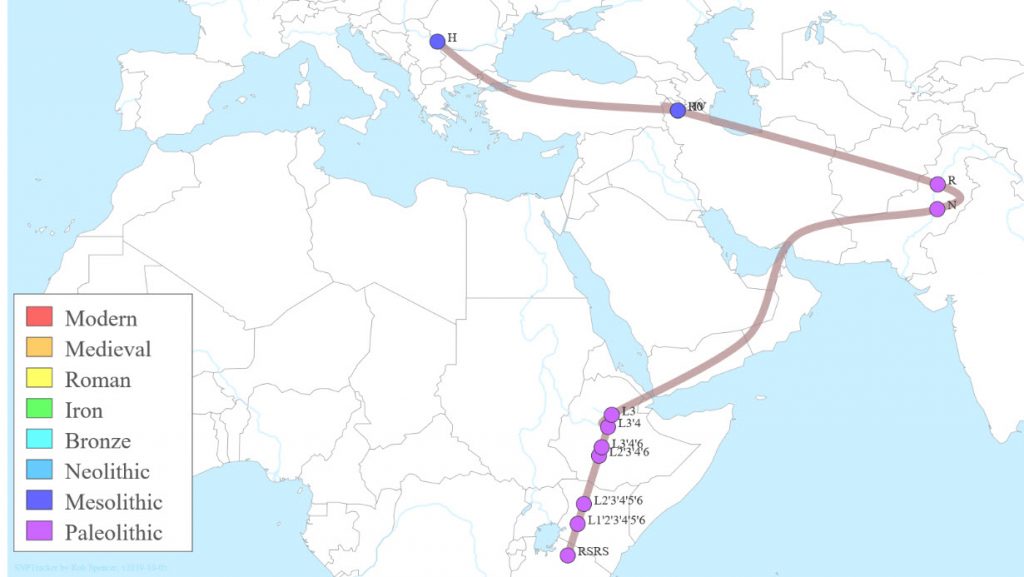